As Season 7 kicks off on POOL KINGS, Premier Pool & Spas was called in to do an entire season of resort style pools for the DIY Network. The first project to debut was the Las Vegas Jackpot Swimming Pool.

Paul Porter the CEO of Your local pool contractor & Spas and his son Brian Porter, the Vice President of Sales host this season and their motto is:

The homeowners who hired the Pool Kings to build their backyard oasis are Brett and Christina Benson. They bought their dream home in Las Vegas, NV, and now they want to build a dream pool to match.

At the very beginning of the show while driving to the homeowners house, Paul says to Brian “We’re definitely going to build their dream backyard.” Well they certainly have a lot of work to do to make it the backyard that the Benson’s have been dreaming about. It’s basically a completely blank slate when they get there! 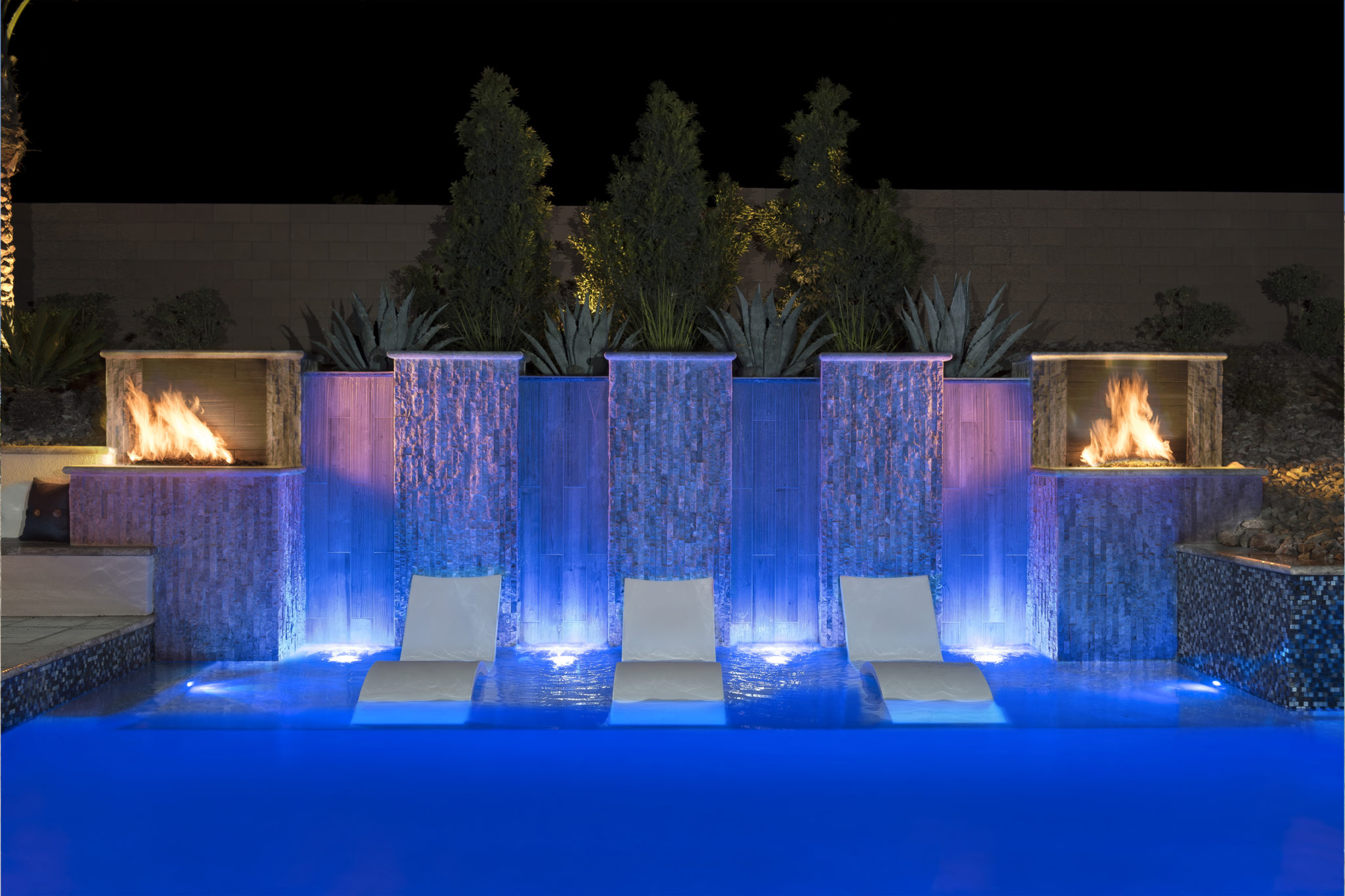 The plans are shown to Brett and Christina, and they’re blown away. Their swimming pool is designed with a 6 foot high retaining wall, with water features flowing over the tile and onto the backs of the seats placed along the wall. “That sounds so soothing & relaxing” Christina says.

Paul explains to them his favorite part of the whole design which is, the spa. The spa has a spillway which flows into a splash pad combo. This splash pad incorporated 2 additional water features and a big umbrella to top it off. Paul also remembered that the family enjoys volleyball, so he suggested adding a professional volleyball net to keep the family entertained and enjoying their favorite sport at home.

Another feature added onto the Benson’s swimming pool is a sunken bar. This swim up bar will be dug 2-3 feet into the ground, which makes it completely level to the people swimming in the pool. The sunken bar is equipped with a 40 inch barbecue, a sink and refrigerator. There are also 5 swim up bar stools in the pool, so whoever is cooking can pass out the drinks!

On the other side of the sunken bar is additional seating area and a dance floor! The dance for can provide an area for everyone to gather and hangout, as well as offer a place for a dining area.

During excavation, the Pool Kings hit a snag and ran into a bit of an issue. They began hitting harder rock and couldn’t dig out all the dirt they needed to excavate the pool.

The owner of Your local pool contractor & Spas of Las Vegas, Ron Bennett, said we have a 25 pound hammer to attach to the tractor that is able to break up the rock. This makes it easier to get the rock out of the backyard, that way they could continue on with excavation.

Once digging is done, nine truck loads of shotcrete is used to fill up the frame of the swimming pool. The shotcrete mixture comes out at 100 mph, and once that is all leveled and smoothed out, they can begin picking out the final details. Paul works with the homeowner on tile selections they want to use for the interior of the pool and Christina picks a goregous grey/glass/sparkled blue tile. “I feel like it really gives off that wow factor.” Christina says After the shotcrete is cured and the walls are tiled, the Pool Kings move onto building the fire place and seating wall. That is when Christina makes a surprise appearance. She tells Brian and Paul that she doesn’t like the how far the fire place is sticking out. Trying to figure out a way to satisfy the homeowner, they come up with a new way to recess the fire place and go deeper into the wall, to give the Benson’s a bigger dance floor. 12 weeks of work and a 900 sq ft swimming pool is complete.

“Benson’s, here is your new backyard!” Paul exclaims. “What?!” Christina shouts and can’t believe her eyes as she stares at her dream backyard. That’s the reaction we dream of every time we build a pool. “Wow! I’m blown away. It’s like having your own tropical island.” Brett adds. The show ends with the Benson family finally getting to enjoy the backyard they’ve always been dreaming of. Another successful POOL KINGS project completed and yet another happy Your local pool contractor & Spas customer.